Table 1: Optimized conditions and reaction scope for the light-induced synthesis of vinyl sulfones from cinnamic acids and sodium sulfonates. 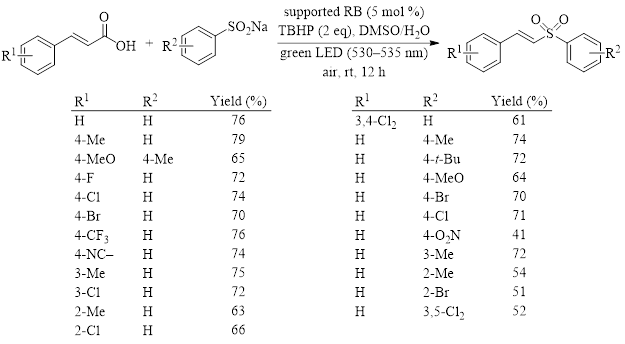 Table 1 shows the yields of several substituted cinnamic acids and sulfinates using the optimized conditions. These results demonstrate that this reaction tolerates both electron-donating and electron-withdrawing groups on both the cinnamic acid and the sodium sulfinate with moderate to good yields in all cases.

Studies showed that the reaction is inhibited in the presence of TEMPO, and EPR spectra indicate that hydroxyl radical is formed and consumed in the reaction. Therefore, the mechanism shown in Scheme 2 was proposed. In this mechanism, light produces the excited-state catalyst which interacts with t-butyl peroxide to form a hydroxyl radical. Through a single electron transfer between the hydroxyl radical and the sulfinate, a sulfonyl radical is formed. This sulfonyl radical regioselectively adds to the cinnamic acid which then undergoes decarboxylation to produce the vinyl sulfone product. 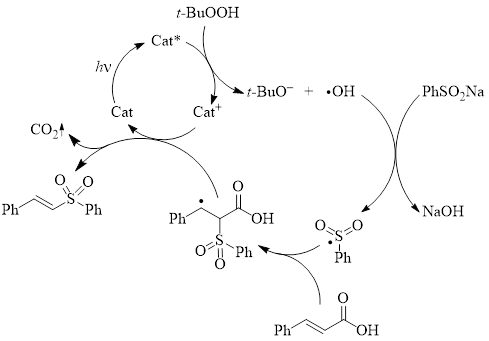 In summary, this work demonstrates the visible-light-induced synthesis of a variety of vinyl sulfones using cinnamic acids and sodium arylsulfinates with a Rose-Bengal-modified Merrifield resin catalyst. The reaction tolerates a variety of substitution patterns on both the cinnamic acid and the sulfinate, giving good yields in all cases.