This makes the recent report by Sultane and Bielawski noteworthy and attractive.1  In this report the commercially-available Burgess reagent [methyl N-(triethylammoniumsulfonyl)carbamate] acts as an efficient and rapid facilitator of the DMSO-mediated oxidation of alcohols at room temperature.   Of note, the Burgess reagent can also be readily synthesized, and a description of the synthesis is given in the Sultane/Bielawski paper.

Despite running the reaction at room temperature, it is still highly selective.  In other words, 1.3 equivalents of Burgess reagent can bring about the conversion of a primary alcohol to an aldehyde in high yields at room temperature in 5 minutes (Equation 1).  No over-oxidation to a carboxylic acid is observed under these conditions.

Equation 1:  Oxidation of a 1o alcohol using the Burgess reagent and DMSO.

The Burgess reagent has been known since the late 1960s² and has been primarily employed as a dehydrating agent to convert 3° and 2° alcohols to alkenes.³ Therefore, there was concern that performing the Burgess reagent/DMSO-mediated oxidation on 2° alcohols might only lead to dehydration and yield the olefinic product.  Interestingly, the dehydration reaction did not occur in DMSO, and only the ketone product was formed (Equation 2).

Equation 2: Oxidation of a 2o alcohol using the Burgess reagent and DMSO.

To test the usefulness of this oxidation in one-pot synthetic schemes, a Wittig reagent was added to the reaction medium (Equation 3). The resulting alkene produced from the oxidation of the alcohol followed by the successful Wittig reaction was formed in high isolated yields (78-83%). It is noteworthy that this reaction occurred without racemization of the chiral center, and the Boc and Cbz protecting groups tolerated the reaction conditions well.

Mechanistic studies were undertaken, and it was found that electron rich benzyl alcohols reacted faster than electron poor ones. In addition, it was found that benzyl alcohol containing a deuterated methylene group (PhCD2OH) reacted at approximately the same rate in this reaction as did nondeuterated benzyl alcohol. This data suggests that the rate-determining step involves nucleophilic attack of the alcohol on the activated DMSO species and does not involve cleavage of the C-H(D) bond. Based on these results, the following mechanism for the oxidation was proposed (Scheme 1). 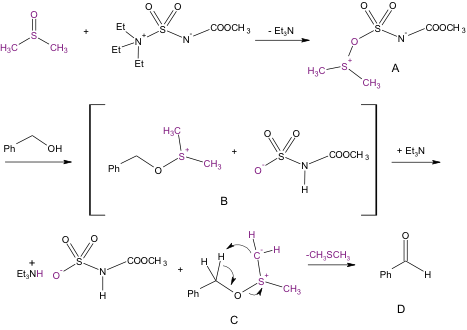 In this mechanism, DMSO displaces trimethylamine on the Burgess reagent to produce A. The electrophilic sulfur of A is then attacked by the oxygen of benzyl alcohol to produce B. After a proton exchange, the ylide species C is formed. Species C spontaneously eliminates dimethylsulfide, resulting in oxidation of the benzylic carbon to produce benzaldehyde D.

This proposed mechanism is similar to that proposed for the Swern and related oxidations. However, it appears to differ in its rate determining step. In the Swern oxidation, the rate limiting step is thought to involve the deprotonation which produces the ylide C.4 In the mechanism involving the Burgess reagent, the rate determining step appears to involve the nucleophilic attack, i.e., the transition from species A to species B. It is thought that this difference accounts for the ability to perform the Burgess reagent oxidation in one pot at room temperature without a series of timed reagent additions and low temperatures required for other DMSO-mediated oxidations.

In summary, this new DMSO-mediated oxidation is mild, rapid, and highly selective.   In addition, it does not require low temperatures, a large excess of the activating reagent, or carefully timed addition of reagents. It also appears to be amenable to one pot oxidation/olefination reaction sequences.