Equation 1:  Chalcogenylation at the 3 position of indoles using diselenides of disulfides as the chalcogen source.

In early 2016, there are two new reports where the DMSO/I2 catalytic system has been used to produce an electrophilic RS-I species which is then available for an electrophilic substitution reaction.3  Both of these papers show that this catalyst system provides green, mild, metal-free, and operationally simple conditions for organothiolation at the 3 position of indoles.

3-Thioindoles have shown potential for use in therapies for the treatment of HIV,4 cancer,5 obesity,6 and heart disease.7  Therefore, routes to thiolate the indole core using readily available sulfur sources without the need for a metal catalyst are very attractive.

Shen, et al., have shown that the DMSO/I2 system can efficiently catalyze the organothiolation of the 3-position of various indoles with thiols acting as the sulfur source (Equation 2).3a

All yields were excellent (except when R3 was an ethyl ester group, 67%).  Interestingly, yields were high (>89%) when R3 was a phenyl ring.  Electron withdrawing and electron donating group substituents were well tolerated on both the aromatic ring of the aryl thiol and on the six membered ring of the indole.

Shen’s group reported that two mechanistic pathways may be at play in this transformation.    As seen in Scheme 1, two pathways have been proposed (path a and path b).  Path a involves formation of a thio radical.  This mechanism is supported by the fact that adding the radical-trapping reagent TEMPO reduced the yield of the model reaction from 97% to 30%.  The researchers propose a second reaction pathway where electrophilic PhS-I is formed in situ (path b).  This route is supported by literature1-2, 8 and by the fact that the reaction still proceeds when the radical pathway is shut down by TEMPO.

Regardless of the pathway, they both depend on DMSO oxidizing I– to regenerate the I2 catalyst (equation c in Scheme 1). 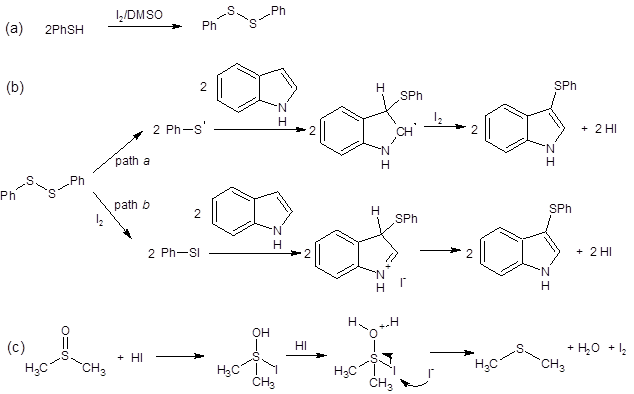 Luo, et al., used Bunte salts (RSSO3Na) as the sulfur source in their synthesis of 3-thioindoles (Equation 3).3b

Bunte salts are readily prepared from sodium thiosulfate and various organohalides.9  They are stable, easy to handle and odorless.  The reaction gave excellent yields in all cases but one where the indole core was substituted at the 2-position with an ester group (66%).

The authors proposed the mechanistic pathway for the reaction shown in Scheme 2.  Here, the Bunte salt reacts with I2 to produce the electrophilic RS-I.  This undergoes electrophilic substitution with the indole ring system at the 3-position.  DMSO oxidizes the resultant iodide ion back to I2.   DMSO acts as both the solvent and as a mild in situ oxidant in this reaction and allows the reaction to be run with only catalytic amounts of iodine. 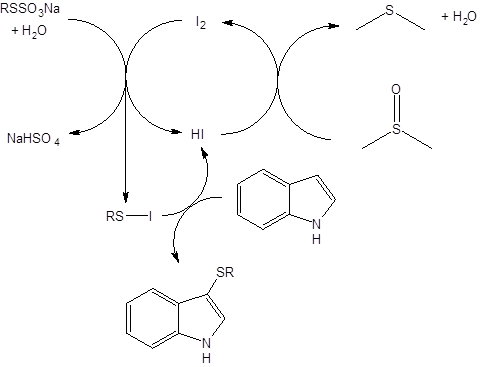 Using this reaction, Luo et al. synthesized a potent inhibitor of tubulin polymerization that shows excellent antitumor activity with a good yield of 67% (Equation 4).  Prior synthesis of this 3-thioindole by a traditional method had only resulted in a very low yield (4%).10

Equation 4:  Synthesis of a 3-thioindole with potent antitumor properties.

In particular, the Luo reaction is attractive as it uses a non-metal catalyst, an oxidant/solvent with low toxicity (DMSO), and inexpensive and readily-available reagents.  In addition, it is operationally simple to perform.