DMSO as the oxidant for Cu-catalyzed synthesis of multisubstituted furans

DMSO as the oxidant for Cu-catalyzed synthesis of multisubstituted furans

Copper-catalyzed synthetic strategies have gained popularity because the economic, sustainability, and toxicological characteristics of copper are attractive compared to several other metal catalysts.  Many of these reactions depend on the oxidation of Cu(I) to Cu(II).  This has often been achieved with peroxides or with molecular oxygen.

In an effort to broaden the scope of Cu-catalyzed methodology, Lei et al. have recently demonstrated the first example of DMSO acting as the oxidant to generate Cu(II) from Cu(I) (Scheme 1).1  They have also illustrated using this method of generating Cu(II) as a means of performing a single electron transfer to an available substrate (Sub).  In fact, they have employed this strategy in the synthesis of multisubstituted furans from readily-available and generally inexpensive aryl ketones and styrenes.

Scheme 1:  DMSO used as the oxidant for circulation of Cu(I) to Cu(II). 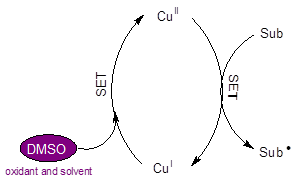 After investigating the interaction of DMSO and Cu(I) via electron paramagnetic resonance and X-ray absorption spectroscopy, Lei’s group concluded that DMSO could indeed oxidize Cu(I) to Cu(II).  Knowing that Cu(II) accepts an electron from 1,3-dicarbonyl compounds, these researchers wanted to explore whether certain aryl ketones might also serve as single electron donors to Cu(II).  With this in mind, they evaluated the reaction between styrene and deoxybenzoin in the presence of a Cu(I) catalyst in DMSO.

They found, upon optimization, that the styrene and the aryl ketone did undergo a coupling reaction which resulted in the formation of a multisubstituted furan (Scheme 2, 12 of 15 examples shown).   A variety of substituents were well tolerated on the aryl ketone.

Additionally, they found the reaction to also worked well with a wide range of styrene derivatives (Scheme 3).  The reaction tolerated both electron-donating and electron-withdrawing groups.  The sterically-crowded 4o could even be synthesized by this method. 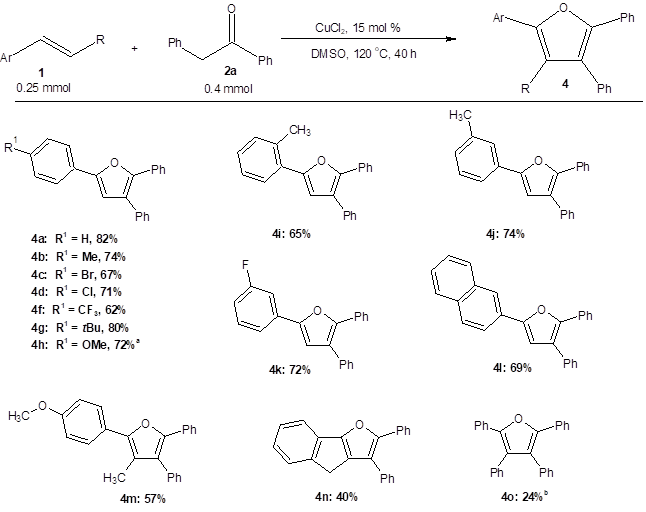 Along with X-ray absorption and EPR spectroscopy indicating that copper(I) is oxidized in DMSO, the addition of radical trapping reagents indicated that the mechanism probably proceeds through a radical process.  With this information in hand, the authors proposed the following mechanism (Scheme 4).

In this proposed mechanism, the radical A is formed by an electron transfer from Cu(II).  DMSO regenerates Cu(II) by oxidizing Cu(I) so that it can reenter the catalytic cycle.   A radical addition of the styrene species creates radical intermediate B.  Radical addition to the carbonyl creates the cyclic structure.  Subsequent hydrogen atom elimination results in species C.  Aromatization gives the final product D.

In conclusion, Lei and coworkers have developed a practical way to successfully use a Cu(I) salt as a catalyst in DMSO.  DMSO functions as the oxidant to generate the active Cu(II) catalyst in situ.  This work represents the first example of DMSO playing the role of oxidant in converting Cu(I) to Cu(II).  This method was successfully demonstrated in the synthesis of valuable multisubstituted furans from inexpensive and readily-available starting materials.