DMSO is known to be a valuable source of a variety of one carbon synthons.1 New work by Tiwari et al. uses DMSO as the one carbon source in an atom-economical and environmentally benign approach to the synthesis of 3-substituted quinolones.2  This work involves transformations that are very similar to the work done by the Guo group3 whose work was summarized in the January, 2018, Synthesis Corner post (“DMSO as the carbon source in transition-metal-free α-Csp3-H methylenation”).

Quinolones with substituents at the 3 position are common in a variety of biologically-active molecules of pharmaceutical relevance. Therefore, many synthetic methods have been developed to synthesize 3-substituted quinolines. Most, however, require highly functionalized starting materials or transition metals. In contrast, the work described by Tiwari’s group does not require transition metals, uses readily-available acetophenones and anthranils as starting materials, and uses DMSO as both the one carbon source and the solvent. The optimized conditions are given in Equation 1.

Equation 1:  Optimized conditions to convert acetophenones and anthanils to quinolones

This reaction generally gives good yields (>70%) with only seven of the 26 examples dipping below the 70% range. This was the case when the quinoline ring had either electron-donating or electron-withdrawing substituents. This was also seen in cases where the Ar group was para substituted with an electron-donating group. Nevertheless, even these lower yielding reactions gave moderately good yields (52–68%).

To demonstrate the synthetic utility of this reaction, the Tiwari group used this reaction in the one-pot synthesis of the biologically important substituted benzodiazepine 4 in a 65% isolated yield (Equation 2).4  The iodoquinolone starting material shown in Equation 2 was generated from 2-iodoacetophenone and anthranil under the conditions indicated in Equation 1.

Equation 2:  One-pot synthesis of a biologically important substituted benzodiazepine 4 from a quinolone generated by the conditions shown in Equation 1.

With this information, the mechanism shown in Scheme 1 was proposed.  In this mechanism DMSO is activated by potassium persulfate to form intermediate B.   Intermediate B is attacked by the enolate anion A to form the thiomethyl ketone C.  Loss of methanethiol from C results in the α,β-unsaturated ketone D.  (Incidentally, reaction of acetophenone with DMSO in only the presence of potassium persulfate at 120 oC resulted in the formation of intermediate compounds C and D.  This also lends support to the proposed mechanism.)  Compound D undergoes attack by anthranil to form intermediate E which quickly cyclizes to form F.  Aromatization then leads to the product molecule 3. 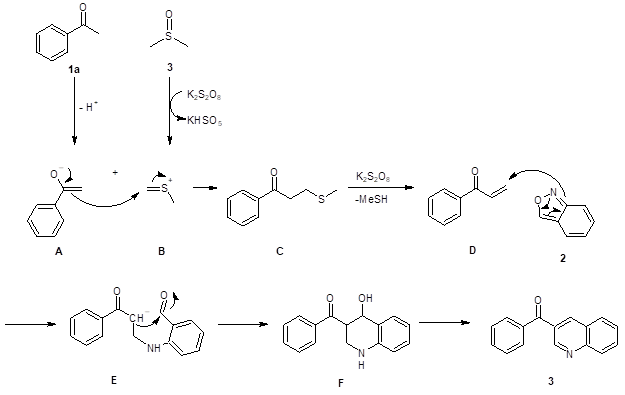 In summary, Tiwari’s group has found another useful reaction whereby potassium persulfate activates DMSO.  The activated DMSO eventually leads to the addition of one of its carbons to the alpha position of a ketone and ultimately yields an α,β-unsaturated ketone.  This reaction is efficient, green, and inexpensive, and appears to work well in one-pot strategies.  In other words, byproducts of the reaction discussed in this post do not appear to impede further modifications of the unsaturated ketone.