Light-induced photoredox-catalyzed reactions are being increasingly reported.1 It is noteworthy that polar solvents are often used in these reactions. The inherent low toxicity of DMSO and its ability to solubilize a variety of species often makes it the best solvent for these light-induced reactions.

That is just the case with work done by the He group from Zunyi Medical University.2 These researchers have recently reported a mild visible light-induced method to difluoroalkylate uracils, pyridinones and coumarins (Equation 1).

As uracil moieties are important scaffolds in biologically active compounds (Figure 1), this facile method of modification could have valuable applications in further elaboration of these heterocycles. 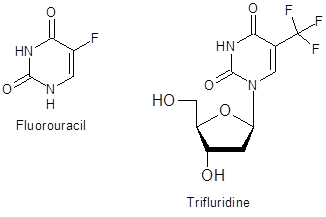 Optimization of the reaction conditions showed that the best photoredox catalyst contained iridium [fac-Ir(ppy3) (0.5%)]; the best base was mild [K2HPO4 (2.0 equiv)]; and the best solvent was DMSO. Irradiation of the model compound of 1 [1,3-dimethyluracil (R1,R2 = Me)] with 2.0 equivalents of ethyl bromodifluoroacetate 2 (R = CO2Et) with blue LED lights for 24 hours under the optimized conditions led to quantitative yield of the product 3a. A variety of substituted uracils all showed good to excellent yields (eight of the 16 examples are shown in Scheme 1).

Scheme 1: Optimized reaction conditions and a few representative products and yields. (The paper shows 16 examples.) a1.5 equiv of K2HPO4 was used.

Not only was the reaction successful with the uracil scaffold (as seen in Scheme 1), it also worked well with a pyridinone scaffold (5 examples) and a coumarin scaffold (6 examples).

This method displays advantages over other techniques to introduce a difluoromethylene group (CF2) to these heterocycles:

2) No protection of sensitive groups is necessary. (For example, NH and OH groups were well tolerated.); and

3) The reaction set up and work up are operationally fairly simple.

Based on other light-induced difluoroalkylation reports in the literature,3,4 the authors proposed the mechanism illustrated in Scheme 2. The iridium catalyst undergoes a light-promoted excitation to form *Ir(ppy)3 which then interacts with the difluorobromide species 2 to produce a difluoro radical A. The difluoro radical A then regioselectively adds to 1 to produce B. Another single electron transfer reaction produces the carbocation C. Species C is deprotonated by the mild base present in the reaction medium (K2HPO4) to produce the difluoroalkylated product 3. 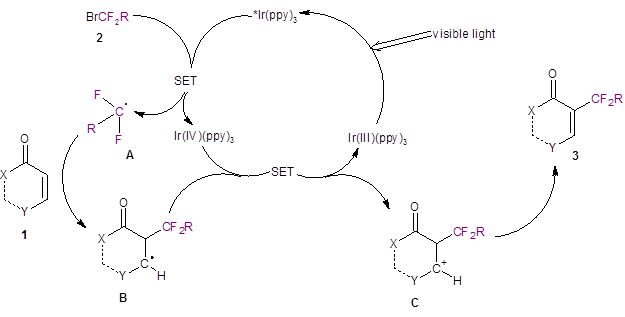 In summary, He and coworkers have demonstrated a new photo-induced route to difluoroalkylate important heterocyclic motifs used in many pharmaceutically-active compounds. Their conditions are mild and tolerated by a variety of sensitive functional groups.