Alkyl halides are a most fundamental functional group and are useful in many reactions.  Typically alkyl chlorides are derived from alkanols, and Dudley Snyder of Pennsylvania State reported an attractive synthesis which uses a ‘DMSO-activated’ TMSCl intermediate (1)

An example from the Dudley paper (1)

There are some advantages to Snyder’s technique relative to the established methods, such as:

Snyder’s method extends the analogous transformation of alcohols to their alkyl bromides or iodides using the corresponding trimethylsilyl halide (TMSBr, TMSI). Apparently the silicon center in TMSCl is not sufficiently electrophilic to invite attack by oxygen. Snyder mentioned that this reaction can be induced when a catalytic amount of SeO2 is used (5).

TMSCl was used to activate hydrogen peroxide as part of a useful dialkyl sulfide oxidation reported in a previous posting.  This oxidation bears some broad similarities to the mechanism offered by Snyder for his chlorination reaction.

Initial O-silation of DMSO provides a reactive intermediate which is susceptible to attack by the alcohol substrate. DMSO then acts as a leaving group and is then regenerated for further use. It can therefore be used in catalytic quantities. Unlike other DMSO-mediated reactions (such as Parikh-Doering oxidations), odorous dimethyl sulfide by-products are not formed.

NMR experiments were performed by Snyder to verify the formation of the existence of the Si-O-S intermediate. 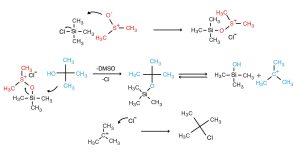 An adaption of the mechanism proposed by Snyder for the DMSO-TMSCl mediated chlorination reaction (1).

Some interesting items pointed out by Snyder included:

Intermediates formed from primary alcohols undergo SN2 substitution by chloride ion; those generated from tertiary alcohols cleave heterolytically to produce a carbocationic species which is subsequently attacked by chloride. Secondary alcohols, being more ambivalent to both carbocation formation and nucleophilic attack, are unreactive in the presence of the weak chloride nucleophile.

Although the author does not make this point, this unreactivity potentially provides a useful element of selectivity: a substrate containing various alcohol types would be expected to react differently under the reaction conditions.

Twelve examples were provided. Ten of these – all derived from primary or tertiary alcohol starting materials – provided excellent alkyl chloride yields (88-96%).  The two attempts to convert secondary alcohols to their corresponding alkyl chlorides were fruitless (0 and 6% yields).

In a 10 mL flask were combined alcohol (0.01 mol) and TMSCl (0.02 mol). DMSO (0.0026 mol) was charged in one portion. Heat and HCl (g) were immediately evolved and the mixture was allowed to stir an additional 10 minutes. Volatile byproducts (presumably TMSOH) were stripped (atmospheric pressure, 89-98°C) and the remaining residue was deemed to be pure alkyl chloride byproduct.