Recently, Jiao, et al.,3 reported a straightforward route to bromohydrins using DMSO as the solvent, oxidant, and oxygen source.   As shown below, the two methods using DMSO as the oxygen source are atom efficient, require only inexpensive and readily-available starting materials, are operationally simple to perform, and eliminate much of the waste formed with the traditional synthetic route.

The first method involves simply stirring an organobromide in warm DMSO for 18 h.  The yields were good to excellent (except in the case of Ar = 4-iodophenyl where the yield was only 36%).

In the second method an aromatic olefin is stirred in warm DMSO containing 1.2 equivalents of aqueous HBr.  The yields for the bromohydrin are generally good with only one example producing less than 50% yield.

Both methods are tolerant of a variety of substituents on the aromatic ring.  Both methods also demonstrate good diastereoselectivity with anti-addition predominating, ranging from anti/syn addition ratios of 6.4/1 to 20/1.

Mechanistic studies were undertaken as shown in Figure 1.  When running the reaction in oxygen-18 labeled DMSO, the resulting bromohydrin was found to incorporate the labeled oxygen, clearly indicating that DMSO serves as the oxygen source in this reaction (Eq. 1).  These authors also investigated whether the reaction of the alkene with Br2 in DMSO would give the bromohydrin.  They found that while the bromohydrin was formed, the yield was much less than that provided by reaction with aqueous HBr in DMSO (Eq. 2).  They also demonstrated that acidic conditions were necessary by testing whether the bromohydrin was produced from the alkene in the presence of simply the bromide ion (Eq. 3).  When sodium bromide was used in place of HBr, no bromohydrin product was formed.

The mechanistic studies led to the proposed mechanism shown in Figure 2.    In this mechanism, if starting from the organobromide 1, HBr is eliminated to form the alkene 2 in situ.  DMSO oxidizes the bromide ion to Br+ (solvated by DMSO) under acidic conditions.  If the starting material is alkene 2, it is necessary to add HBr to the reaction to facilitate the formation of Br+.  The alkene 2 reacts with Br+ to form the bromonium ion 3.  This bromonium ion undergoes nucleophilic attack by the oxygen of DMSO to produce 4, which ultimately undergoes hydrolysis to form the bromohydrin 5. 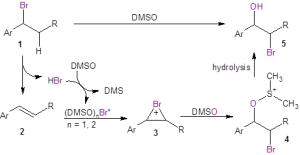 These researchers also demonstrated that these two simple and mild reactions to form bromohydrins could be used in the one-pot syntheses of other valuable building blocks like azidoalcohols 6 and epoxides 7 (Figure 3).  When starting with the organobromide 1a, the azidoalcohol 6 was produced in good yield by simply adding sodium azide to the reaction flask after the bromohydrin formed.  Also, 1a could be efficiently converted to the epoxide 7 by making the bromohydrin and then adding sodium hydroxide.  These one-pot methods also worked when starting with the alkene 2a.

Jiao and coworkers have developed a simple and atom-economical method to produce bromohydrins from readily-available starting materials in warm DMSO.  This method capitalizes on the ability of DMSO to act as an oxidant and as an oxygen source, thereby reducing the expense and waste inherent in traditional methods.