AN OVERVIEW OF CATALYST SULFIDING

The purpose of this publication is to present an overview of the presulfiding process. One of the first sulfur-bearing agents used in the 1960s was Dimethyl Sulfide (DMS) supplied by Crown Zellerbach, Inc, now Gaylord Chemical Company. DMS Exact-S™ and DMSO Enviro-S® are two products manufactured by Gaylord Chemical that are used in this application.

Petroleum refining is a sophisticated technology combining many different chemical reactions. Hydrocracking includes breaking the viscosity of heavy and light fuel oils, treating C 5 + fractions produced in steam crackers, producing lubricants, and converting gas-oils to more valuable products. Hydrodenitrification is used to process feedstock with catalysts in a hydrogen environment without splitting molecules into lower boiling hydrocarbons and to remove nitrogen. The hydrodesulfurization process is done in the presence of hydrogen to remove sulfur from hydrocarbon molecules in feedstocks such as naphtha and gas-oils derived from straight and vacuum runs. Reforming increases the octane of gasoline by rearranging hydrocarbon molecules without altering the number of carbon atoms. It also is used to produce aromatics in the gasoline boiling range. Hydrodealkylation converts toluene to benzene and methane.

A variety of metallic catalysts may be used for the preceding processes. Presulfiding is often done to enhance activity as in hydrodesulfurization or control hyperactivity as with fresh or regenerated catalyst used for hydrocracking. Under certain operating conditions, such as hydrodealkylation, presulfiding selectively poisons the active sites that may degrade benzene.

Depending on the weight and type of metals present, catalysts are classified as monometallic, bimetallic, and multimetallic. Catalysts are normally small extrudates about l/20 th to l/l6 th inch in diameter with a cylindrical or configured shape. Only the catalyst’s metallic surface is active. During presulfiding, sulfur is deposited on the catalyst’s homogenous surface. In situ presulfided catalysts facilitate chemical reactions to convert feedstocks into final end-use products, but they do not become part of the finished products.

The procedures used today were developed in the early 1960s. The process is accomplished in a reactor of a size consistent with the volume of feedstock to be processed. Three chemical materials are necessary for presulfiding: (1) the sulfur-bearing agent; (2) the catalyst; and (3) hydrogen. Heat is required to carry out the process. A typical presulfiding process is described as follows:

Layers of catalyst are arranged inside the reactor where presulfiding will take place. Air (containing oxygen) is stripped from the atmosphere inside the reactor with an inert gas or hydrogen. To dehydrate the catalyst, about 200 – 250°F heat is applied. A vacuum is also used if necessary to assure complete dehydration. After drying the metallic catalysts and stripping the inert gas (if used), hydrogen is injected under pressure and the start-up oil (two to four percent sulfur contained in the presulfiding agent) is introduced to soak the catalysts. Heating of the reactor is commenced to 250 – 400ºF at 50°F per hour. Injection of sulfur spike should be commenced at 350 – 400ºF. 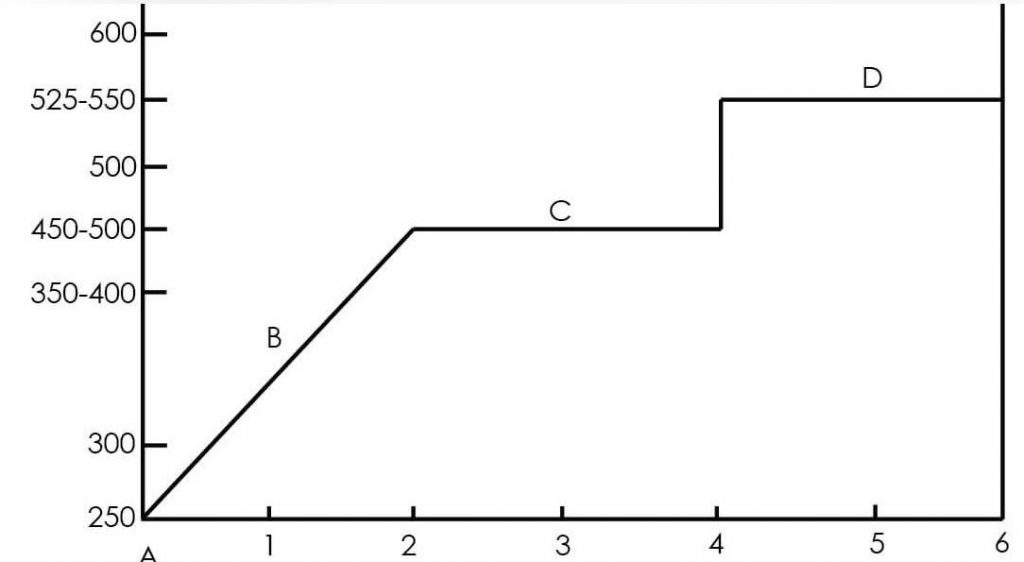 Hydrogen sulfide, which serves as the sulfiding medium, reacts sulfur with the surface of the metallic catalyst. Metal in the catalyst gives up oxygen during the process and combines with hydrogen to form water . Sulfur replaces oxygen on the catalyst. A minimum of four hours is necessary to complete the presulfiding step. (See the presulfiding schedule graph, p. 2). Eight to 10 hours are usually required to presulfide a typical batch (200,000 pounds) of catalyst. While the sulfiding agent is continuously injected into the reactor, the hydrogen sulfide content is monitored. The sulfide ion undergoes an exothermic reaction with the catalyst causing a thermal front. The temperature of the front is monitored with thermocouples and is controlled by the amount of DMS Exact-S™ or DMSO Enviro-S ® admitted. If the hydrogen sulfide content decreases when the injection of the agent is stopped, then additional sulfiding time is required. Passage of the thermal front through the entire catalyst bed and the presence of H2S in the recycle gas are indicators that the sulfiding is complete.

Why do Refineries Presulfide Catalysts?

Catalysts in their oxide state are not selective enough to perform their required functions (make their required cuts). To make them more selective and controllable, they must be presulfided.

How is Sulfur Introduced into Refining Processes?

In its familiar powder form (elemental) sulfur is virtually impossible to use in the chemical reactions required in petroleum refining. When sulfur is contained in a liquid state, like DMS and DMSO, it can be easily manipulated. Presulfiding catalysts with a sulfur-bearing agent is how sulfur becomes chemically involved in various refinery processes. DMS Exact-S™ can be fed to the catalyst bed by either vaporizing it with hot hydrogen of by pre-blending it with a light naptha stream. In both instances, sulfiding is carried out at high hydrogen partial pressure.

What Does Presulfiding Do to Catalysts?

In some systems, presulfiding passivates the catalyst and “calms down” the exothermic reaction (generation of heat). In others, the metallic oxides in the catalyst are changed to metallic sulfides, thus activating the catalyst before going into production.

How to Determine if a Presulfiding Process is Costing too Much

Cost per pound of sulfur is one factor to consider when selecting your presulfiding agent. Important physical properties of agents to consider include: odor, toxicity, boiling point, flash point, and autoignition temperature for each option Another consideration is that DMDS breaks down in the reactor to form DMS and methyl mercaptan. Why not start with DMS? These various physical properties should be compared to determine which presulfiding agent best satisfies your operational requirements to achieve maximum sulfiding results at the lowest cost.

Environmental considerations and safety measures are key factors influencing the cost-effectiveness of presulfiding agents. Maintaining compliance with federal, state, and local regulations can be accomplished more efficiently with some presulfiding agents than with others. For example, a low odor/low toxicity presulfiding agent that is biodegradable is desirable or one that allows easy clean-up of spills. We recommend DMSO Enviro-S® for refinery projects located in a densely populated community. A higher cost for this type of agent may be well justified by the economies achieved when complying with environmental and safety regulations.

Why is Low Toxicity a Key Factor in Determining Cost-Effectiveness of a Presulfiding Agent?

A compound with low toxicity is easier and safer for plant personnel to handle and there are fewer environmental considerations. Toxic compounds require expensive safety measures, e.g., clothing, masks, monitoring equipment, and alarms. These items all translate into direct costs for presulfiding operations.

Note: LC, is the concentration in air In ppm that kills 50% of the test animals. Study by Temple University. 1978.

Why is the Source of Supply for a Presulfiding Agent Important?

Gaylord Chemical manufactures is an on-purpose producer of Dimethyl Sulfide (DMS). For some manufacturers, DMS is a by-product. We are very focused on product purity, consistency and availability. Choosing a dependable source of supply permits the customer to establish a cost-efficient routine that will not be plagued with out-of-stock situations, late deliveries and off-specification product. An ample supply of consistent, high-quality product delivered when and where it is needed is invaluable.

How Does Technical Service From a Supplier of Presulfiding Agents Translate into Cost-Effectiveness?

Information on products, equipment, safety and environmental matters. Technical assistance from Gaylord Chemical is always available to help solve problems, another example of how we strive to maximize value to our customers.

What Type of Equipment does Gaylord Chemical use to Deliver Presulfiding Agents to Refinery Locations?

Gaylord Chemical ships these products in high pressure trailers equipped with visual gauges to monitor the volume of product inside the trailer without releasing material into the atmosphere. This is used to size our totalizers and rotometers that are installed after our trailers are in place at the refineries. We provide an SDS on the presulfiding agent so that customers can establish appropriate connections and off-loading procedures.

What Chemical Materials and Equipment Are Commonly Used in the Presulfiding Process?

The presulfiding agents commonly used include DMS, DMSO, DES, DMDS, H2S, TNPS, methyl and ethyl mercaptans. Presulfiding agents range in sulfur content from 36 percent (DES) to 94 percent (H2S). Other chemicals used in the process are the catalysts and hydrogen. The equipment includes the reactor where the presulfiding takes place, plus high-pressure trailers or tanks equipped with metering equipment to transfer the agent to the reactor.

What Happens to Sulfur in the Agent During the Presulfiding Process?

The presulfiding agent decomposes in the hydrogen atmosphere under heat with the catalysts and sulfur combines with hydrogen to form hydrogen sulfide, which serves as the medium to react the sulfur with the metallic surfaces of the catalyst. The presulfided catalyst causes a chemical reaction with the feedstock to produce the desired product.

What Causes the Presulfiding Agent to Decompose?

Note: The temperatures shown above have been observed in hydrotreaters in the field to release sulfur for the generation of H 2 S. The catalyst determines the decomposition temperature for the spiking agent.

What Happens to the Hydrogen and Sulfur Elements After Presulfiding is Completed?

The remaining elements are scrubbed out and destroyed in an amine unit.

Is the Total Sulfur Content of the Presulfiding Agent Converted to Hydrogen Sulfide and Reacted with the Catalysts?

Yes. However, all the sulfur does not necessarily go to the catalysts. Presulfiding should be done in an environment with an excess of sulfur to avoid “starving” the catalysts.

What Factors Determine the Rate and Amount of Decomposition of the Presulfiding Agent?

The type of catalyst being presulfided and the temperatures used during the process influence the rate and amount of decomposition.

What Are the Major Cost Considerations in Presulfiding?

The major cost is for catalysts. The price of the presulfiding agent is a small fraction of the catalyst’s cost. Time required to perform the process can be translated into costs, which could be a significant economic factor.

Evaluation of Presulfiding Agents in Common Use

Note: highest number is most desirable

Comparison of Presulfiding Agents in Common Use

The information in this bulletin is based on information available to us and on our observations and experiences. However, no warranty is expressed or implied regarding the accuracy of this data, the results to be obtained from the use thereof, or that any use will not infringe any patent. Each user must establish appropriate procedures for off-loading, handling, and use of the product(s). Since conditions for use are beyond our control, we will make no guarantee of results, and assume no liability for damages incurred by off-loading, handling, or use of the product(s). Nothing herein constitutes permission, or recommendation to practice any invention covered by any patent without license from the owner of the patent.